The Plastic Revolution and a boat made of flipflops

Find out Ben's other passion outside of travel

Our Director Ben spends a lot of his life talking about travel, especially Laikipia in Kenya, his go-to travel destination. Yet it's not his only passion. He is also at the forefront of conservation, especially when it comes to plastic pollution, and the increasing effect it is having on the environment.

On his frequent visits to East Africa, Ben noticed a staggering increase in the amount of plastic being washed up along the coastline, and decided to do something about it. Together with some friends he started the FlipFlopi Project - an audacious attempt to build a sailing boat made entirely from plastic waste - to demonstrate that plastic can and should be recycled and re-used rather than just being treated as a single-use commodity.

The prototype - Flipflopi Dogo - was completed, and by so doing they've achieved something that has never been done before... A WORLD FIRST!!

The Flipflopi was sailed from Lamu to Zanzibar. This journey and the Flipflopi message reached 890 million people worldwide and it was covered across media worldwide.

It resulted in two nationwide bans on plastic bags.

The Flipflopoi set sail again, supported by the UK Government, EU and United Nations, they headed upstream to Lake Victoria to raise vital awareness of how pollution upstream affects our oceans, whilst chartering the difficult and intrepid waters of Lake Victoria.

Ali, our MD, joined Ben and the Flipflopi team in spreading the word against single-use plastic.

As a result of the expedition, the Flipflopi is now going big and bold on setting up what will be the first-of-its-kind waste material recovery centre and closed-loop waste management system in this remote part of East Africa. The Flipflopi has now received its NEMA operating licence for its plastic-recycling workshop in Lamu and continues to work closely with national and county governments on a holistic approach to tackling plastic pollution. This is a key step in moving towards a world where we reduce our waste while bringing jobs and value to communities.

Ben explains all about the Flipflopi's mission in the below film created by the British High Commission. Click to watch! 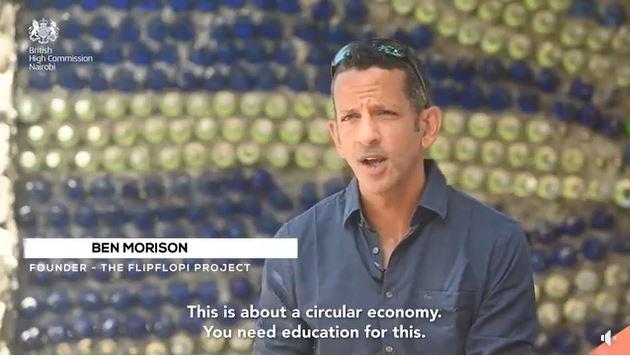 Check out the videos on the BBC, and Sky News. And we can't forget the local press, here's a great article in our local Westmorland Gazette.

There's also a fantastic mention in The Times:

Hear about the Flipflopi first hand!

Ben also does speaking engagements about the project, including at the Royal Geographic Society in London, school audiences around the UK and Kenya, and at a number of corporate businesses. If you'd like to discuss a potential speaking engagement, get in touch with him at hello@farandwild.travel.

Find out more about the beautiful Kenyan Coast, the best places to go, things to see and more.

I've been involved with holidays to Africa for pretty much all my life... growing up in Sudan and Kenya taking them, and then a working life in the UK making them. I'm happy talking about anywhere from Cape Town to Kenya, and now that I've got 3 children, I'm fast becoming a family holidays expert too.